El Carromato is a professional Street Theatre company founded in Cadiz (Spain) in 2000 by his director Pascual Varo. We develop projects for the street, parades and special events. Our shows are created from small to large format with a variety of languages including performance, physical theatre, lighting, dance, etc.

El Carromato has taken part in some important events as the Opening Ceremony as well as the Closing Event of the European Capital of Culture Valletta 2018 (Malta), Theatre Festival of Sibiu (Romania), street festivals in Europe, Asia and Africa, parades as Carnival of Nice (France) and also other kind of events as music festivals, tv, Hogmanay (in Edinburgh), parties-corporate events and even weddings! Their productions have been showed in more than 25 countries.

The wellknown Big Dancers was finalist of “Best Street Theatre 2016” of Spanish Lorca Awards by the theatre association of Andalusia.

El Carromato also cooperates with other street theatre companies abroad from some years ago, developing projects of other companies (as Rui Paixao from Portugal or the german company Oakleaf) for to bring their works to Spain and supporting adding artists, technical support and production meanwhile we change experiences, cultural, political, social… 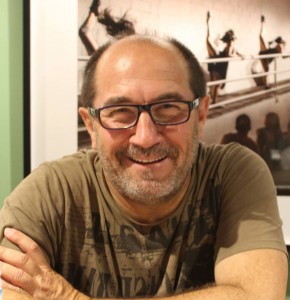 Director of the company.

He is author of most of the company productions. He began playing theatre at 80’s at Teatro Jaramago company with the famous play El Retablillo de Don Cristóbal (by Lorca), Odisea and El Matador (scenic poems) by Rafael Alberti. He teached interpretation at Theatre School in El Puerto de Santa Maria and then he founded Piesplanos Teatro company which he made his first outdoor performance and was showed in opening of Isla de la Cartuja ’93 theme park in Sevilla.
He took courses with important directors as Franklin Caicedo, Manuel Morón, Antonio Onetti or Antonio Álamo…
He was teacher of street theatre for five years at University of Cádiz.
In 2000 he founded El Carromato, the professional Street Theatre Company with the play “Otto’s Machine” (theatre for childrens) writed by himself.

He studied Master in Performing Arts in the University of Sevilla. He also got two degrees in the University of Cádiz: one in Advertising and Public Relations and other one in Music Education, as well as a degree in Expert Culturel Manager.
He worked with Els Comediants. He began at thirteen playing theatre and making lighting designs for classicals plays with the group Balbo in the Roman theatre in Mérida, Sagunto, Itálica and Segóbriga. His work was played in Arriaga Theatre of Bilbao, Festival Palace of Santander, Teatre Novedades of Barcelona, Pavón Theatre of Madrid…