Five, four, three, two, one… Edinburgh’s Hogmanay is where the world comes to party, a three day festival to celebrate the New Year! Over 165.000 people from 80 countries attended the event, and we were there!

Although 1 January 2019 marks the start of the year in which Scotland left the EU, they remain part of Europe and so Hogmanay 19 was a celebration of their continental ties and their shared history and culture. Every year they welcome the world to ring in the New Year in the home of Hogmanay and celebrate their cultural connections with the world. 2019 is the time for them to celebrate our ties with Europe and ask the world to say – “WE LOVE YOU”. Tickets for Edinburgh’s Hogmanay Street Party have been on sale since January 1st every year. 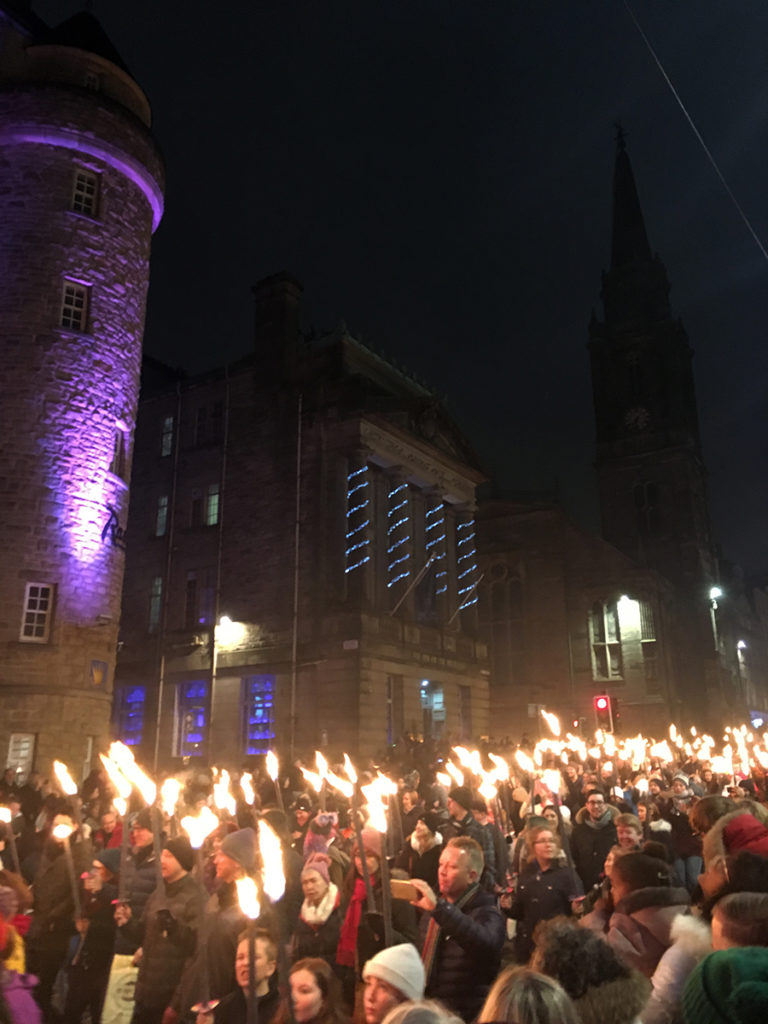 Let’s clear things up – simply put Hogmanay is the Scots word for the last day of the year and refers to the celebration of the coming New Year. But they like to call it Scotland’s New Year Festival, because it’s so much more than that. Here we give you the lowdown on what it all means so you can celebrate like a local. Did you know that in Scotland Hogmanay is sometimes considered more important than Christmas? That’s because the Church of Scotland outlawed Christmas for nearly 400 years (it only became a public holiday in 1958). Hogmanay on the other hand, was always celebrated, and so 1 and 2 January are public holidays in Scotland (you’ll need them to survive the hangover). Some families even mark the occasion with a special meal – usually steak pie.

All those hundreds of years with no other winter holiday means that nowadays we pull out all the stops for Hogmanay. That’s why Edinburgh’s Hogmanay events start on 30 December with the Torchlight Procession, and don’t end until 25 January 2019 with Message from the Skies.

You can join the Torchlight Procession on 30 December and witness the historic streets of Edinburgh lit up by thousands of torchbearers, or if you’re a hardcore music lover then the Street Party hosted by Johnnie Walker featured talent like Franz Ferdinand, Glasgow-favourite Gerry Cinnamon, Judge Jules, Elephant Sessions, SNAP!, Meute (and all hosted by homegrown DJs the Mac Twins), features a fireworks display made just for you. 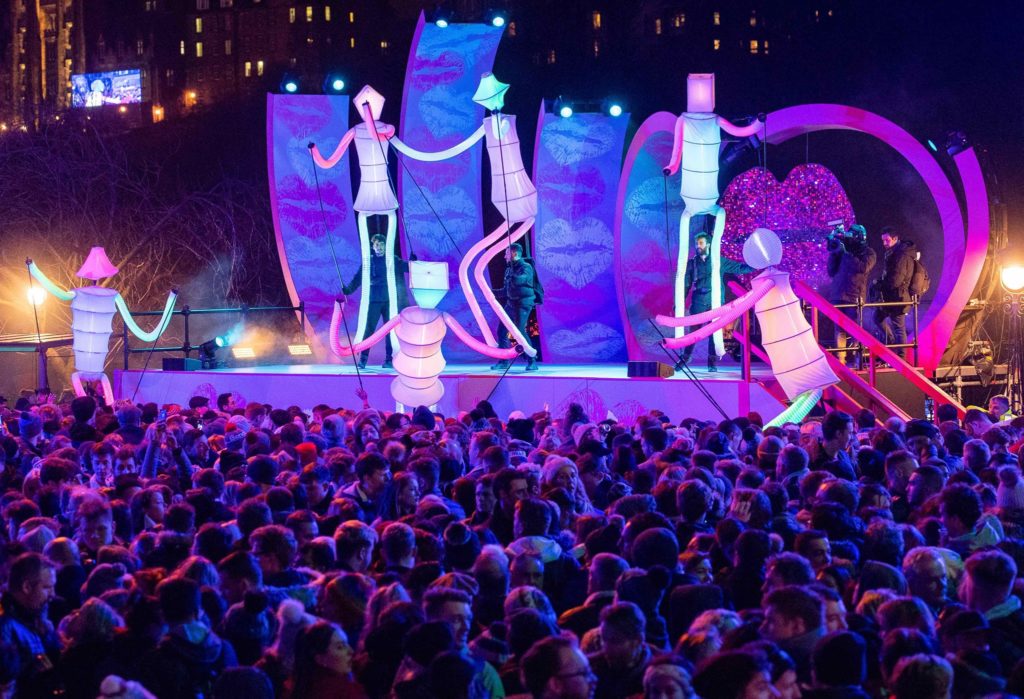 This year’s Street Party hosted by Johnie Walker was spectacular! From the moment the doors opened at 7.30pm, ‘til long after the midnight bells fell silent, bands and DJs, street artists, aerialists, musicians and dancers from Scotland and mainland Europe created a party that will live long in the memories of the tens of thousands who gathered to bring in New Year in Edinburgh. Street Party was directed by Struan Leslie, a non-stop five and a half hour party as Princes Street is transformed and animated by a host of international, UK and Scottish artists. Overseen and conceived by Struan and working with a creative team of international events creators, bringing together a mix of traditional and extraordinary elements to create a night to remember. Big Dancers was selected for taking part at Hogmanay with other very important companies from France as Transe Expres and Quidam, and Netherlands as Close-Act.

Edinburgh’s Hogmanay is produced by Underbelly. The Programme is funded by the Scottish Government, the City of Edinburgh Council, and the Edinburgh Festivals, and supported and administered by Creative Scotland. 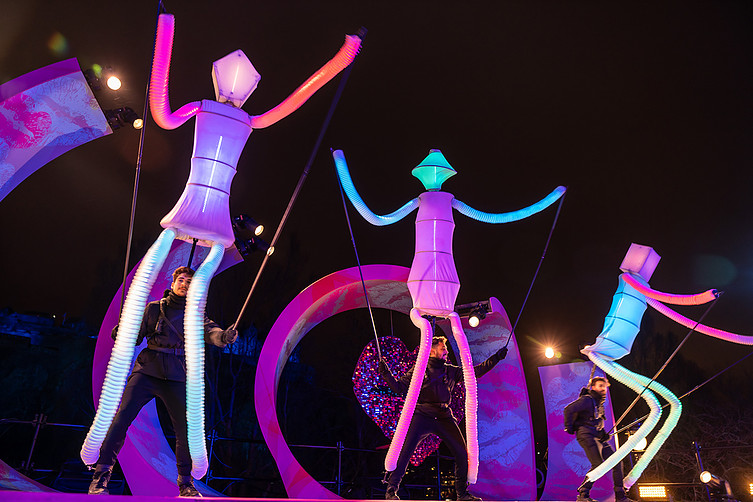 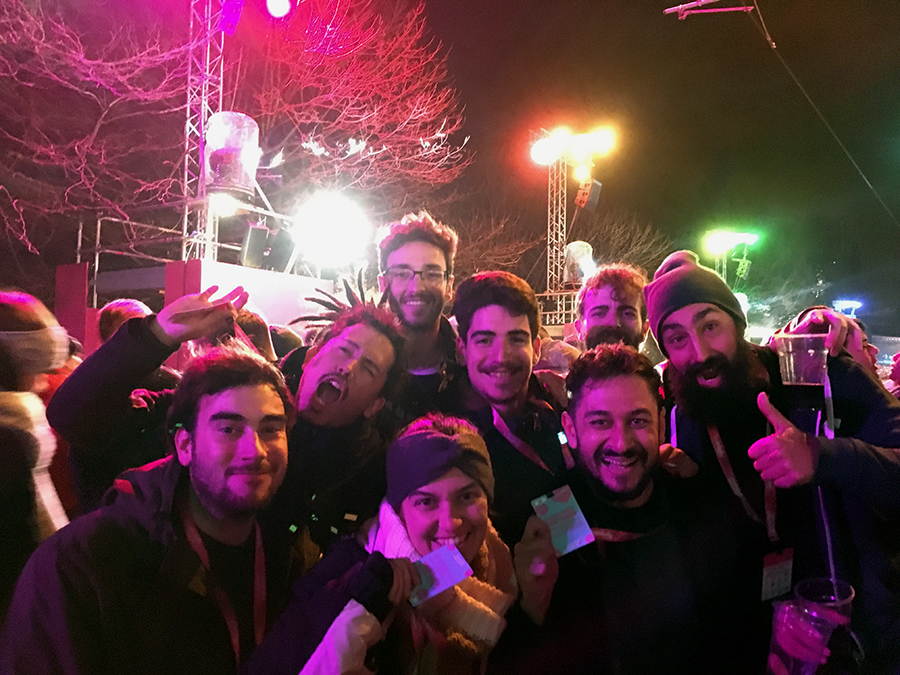