Recently we took part with our show Big Dancers in the Sibiu International Theatre Festival in Romania. Internationally, it has become the most important performing arts festival in Europe, judging by its ampleness, dimension, and quality of events, before Edinburgh International Festival (Great Britain) and Avignon Festival (France). This is one of the most prestigious festivals in the world and where this edition some famous theatre companies played as Odín Teatret and celebrities as Thomas Ostermeier, Tim Robbins, Victor rebengiuc, Luk perceval, Alvis hermanis, Christoph Marthaler, Evgheny mironov. Performing in this festival has supposed a new hit of El Carromato on having received with happiness the congratulations of Constantin Chiriac, Festival Director. 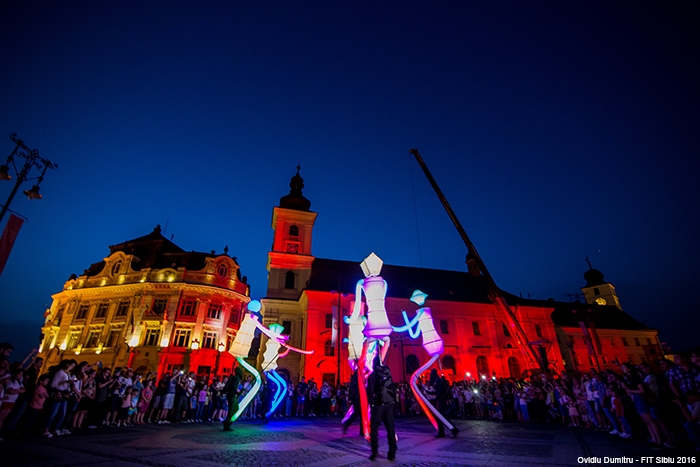 Two intense days where street theatres had an important relevancy. For this ocassion we made a larger format of the show with 6 marionettes. During the day the colorful puppets animated fills of hundreds of spectators at the Strada Nicolae Bălcescu, the main street of Sibiu. 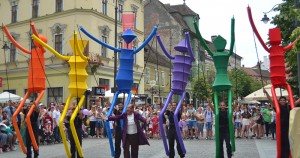 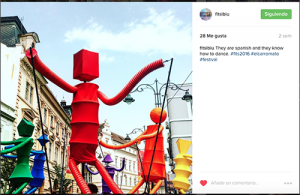 The public had fun with our scenic offer fills of good energy and our performers demonstrated our skill playing with the giant marionettes 13ft. This way the festival said it in his instragram account @fitsibiu: “They are spanish and they know how to dance”.

Later overnights we showed the marionettes which have life with the help of lights. Big Dancers began at Strada Nicolae Bălcescu where hundred of spectators were waiting the parade that crossed the whole street to guide the public up to the square

During the short parade no one was indifferent. Everybody felt the magic atmosphere that the marionettes make with lights of colors, even amazed spectators touched them. When they arrived to Piața Mare thousand of spectators enjoyed with our large format scenes in the middle of square. Several scenes fused the technology with the creativity and the theatricality getting some choreographies with different effects of lighting synchronized with the music and movements. Thousands of persons remained satisfied, provoked many plaudits and more than one ovation.